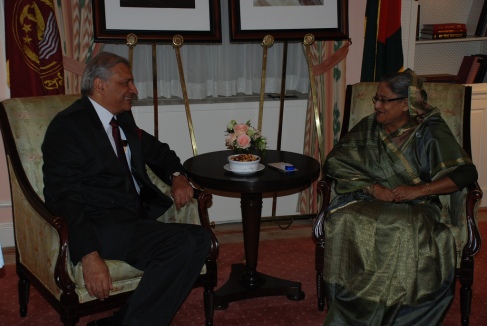 One hundred people in Bangladesh were killed on their way to vote in the recent elections. There will be some people, connected and in power, who will celebrate and consider this a good day for democracy. How wrong they are.

Sheikh Hasina, the first woman prime minister of Bangladesh, resumed the office she has held since 2009. But what has happened in the last two weeks? The leader of the opposition, Khaleda Zia was put under house arrest, and 21 political parties were banned with night raids on the homes of opposition supporters. Voting was stopped at over 400 polling stations, and more than 100 people were killed in the run-up to the ballot, mostly in rural areas. Fears of violence kept many voters away, and fewer than half of parliamentary seats were contested.

Most international observers have shunned this election as incredible.

The human rights abuses and “rampant corruption” (see below) under Sheikh Hasina’s regime is not to be overlooked, and it is unnerving that the pro-government newspapers and elite spectators in Bangladesh ignore it.

Worse, the Hasina administration’s support for the Shahbag movement, whose demands include hanging those accused (not convicted, accused) at the domestic war crimes tribunal, banning opposition political parties and arresting writers who are critical of them is deeply chilling.

Last year the government’s security forces ransacked the offices of human rights activists for reporting abuses against protesters, whilst two activists of the Bangladeshi human rights organisation Odhikar were taken into custody and are now appearing before a cyber crimes tribunal.

There have also been violent attacks on journalists, including the murder of a blogger. That disturbs me. All from the same government forces who charged with batons and opened fire on grieving protesters who were demanding compensation for the loss of their loved ones after the Rana Plaza factory tragedy in which over 1,100 people died.

It was the worst accidental structural collapse in human history, and it was preventable. Sheikh Hasina’s response was “accidents happen”. She spoke on CNN shortly after, reading from a sheet of paper.

In the way that the regimes of the middle east have been scrutinised, serious questions must be asked of this government. There are estimates that less than 10% of voters turned out in the elections. The EU, USA and Commonwealth did not send observers to monitor the polls, which were not deemed to be “transparent, inclusive and credible”.

Whilst allies of Bangladesh keep silent on the record of human rights and corruption, they usually laud the progress of Bangladesh in the 20th century. But the real test will be whether and how they deal with this administration in the coming years, and if they can legitimise the problems they have just called out.